Having Problems with Acne?

Acne is not something you have to live with. Speak to a doctor to find the most suitable solution to your acne issues today.

Acne is the most common skin condition affecting at least 75% of us. It usually appears on the face, and can also appear on the scalp, neck, and back.

Though there are many claims to the causes of acne, a simple explanation can be used to illustrate how it forms.

The surface of our skin is made up of pores, which are openings to follicles that host a hair and a sebaceous (oil) gland, similar to onion in the ground. 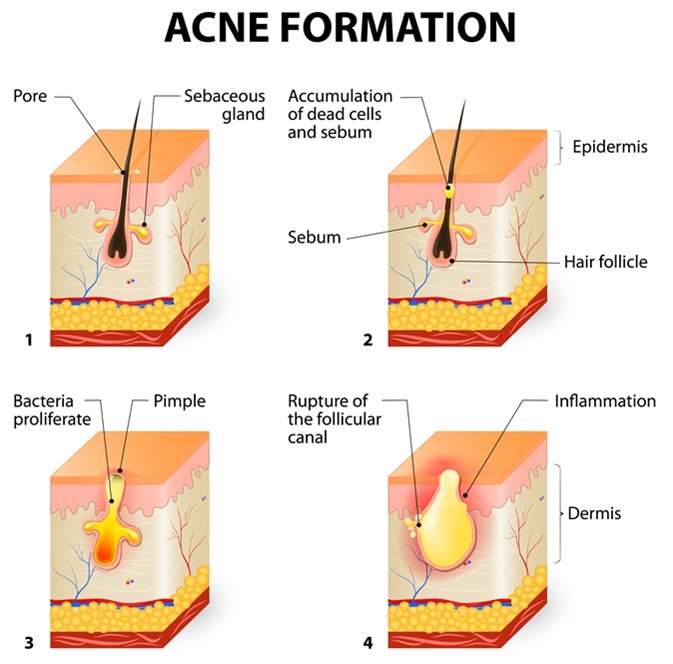 The sebaceous gland secretes sebum into the follicle (where the root of the hair is) continuously, causing the substance to rise and flow out of the pore opening along with dead cells and bacteria to form a thick glue-like substance.

Formation of skin acne. The sebum in the clogged pore promotes the growth of a certain bacteria called Propionibacterium Acnes. This leads to the redness and inflammation associated with pimples.

Propionibacterium acne, commonly known as p.acne, is the bacteria that survive within the pore, feeds on the sebum and proliferates.

When there is too much oil, p.acne and dead cells build up in the pore, and the pore becomes clogged and blocked.

A raised surface on the skin appears as a result of this plugged pore called a comedo.

As the surface of the pore is blocked and raised, and the pressure within the pore begins to rise, and the follicle expands like a balloon being filled with water, creating an enlarged pocket of thick, dirty material. Thus, a pimple erupts.

What are the Causes of Acne?

Besides the active production of sebum, acne can also be caused by hormonal changes during puberty, menses or pregnancy; certain medications or supplements like birth control pills or protein powder; genetics or maybe even stress.

When this infection occurs, we would naturally start touching it more, picking it or squeezing it. Introducing harsh or unsanitary elements to the lesion can cause adverse effects – the acne may spread to a wider area or even leave permanent scars on your face.

To treat acne, we must first understand why and how it happens. We all have hair follicles, structures in the skin which house hair. Sometimes, oil produced by the skin, also called sebum, combines with dead skin cells to clog the hair follicle. We also have a type of bacterium called P. acnes on our face most of the time.

When hair follicles get clogged, P. acnes feed on the clogged, causing inflammation and infection.

Possible solutions for the treatment of Acne:

There are many treatment options to treat and manage acne. Acne is not something that you have to live with. Speak to a doctor specialising in Acne to find the most suitable solution for your acne.

Over the past 15 years, we have been helping patients from all over the region regain their confidence with an improved quality of life by providing treatment and management services for their skin conditions.

The journey to better skin health is an ongoing process; We are priced affordably to provide you with sustainable and effective results. Speak to our doctors to find out more. Same-day appointments are available.

Most skin diseases are not fatal. However, if skin diseases very often when left unattended can lead to significant psychosocial debilitation, emotional distress and low esteem.

Fortunately, over the years, medicinal advancement brings its wake new treatment options which, if not a complete cure, alleviate symptoms tremendously. Speak to our doctors today!

Fill out the form below and we will contact you during our working hours.
For urgent requests, please call +65 6235 1339.