An article was recently published in the Straits Times on 21st June 2019 titled “Skull ‘horns’, text necks, trigger thumbs: 6 health issues that may be linked to smartphone use”, reporting about the impact of modern life on the skeleton in young adults.

Before your imagination starts running wild, the situation is not as terrifying as it sounds, and no, teenagers are not growing actual horns out of their skulls.

What are Skull ‘Horns’?

In 2016, Professors David Shahar and Mark Sayers from the University of the Sunshine Coast in Queensland, Australia, found that out of 218 people aged 18 to 30, about 40% had a bony growth near the base of the skull called an enlarged external occipital protuberance, or EEOP.

They followed with a second study in 2018, where they studied X-rays from 1,200 people aged 18 to 86, of which a third showed growths. People aged 18 to 30 were the most likely to have an Enlarged External Occipital Protuberance (EEOP), which was an unexpected finding as the researchers had expected older adults to have the highest risk.

The term “skull horns” was later coined by the media as a means to sensationalise the extent of these growths when in actual fact they are only between 1 to 3 cm in length; definitely noticeable, but probably not as dramatic as the mental image one might conjure. 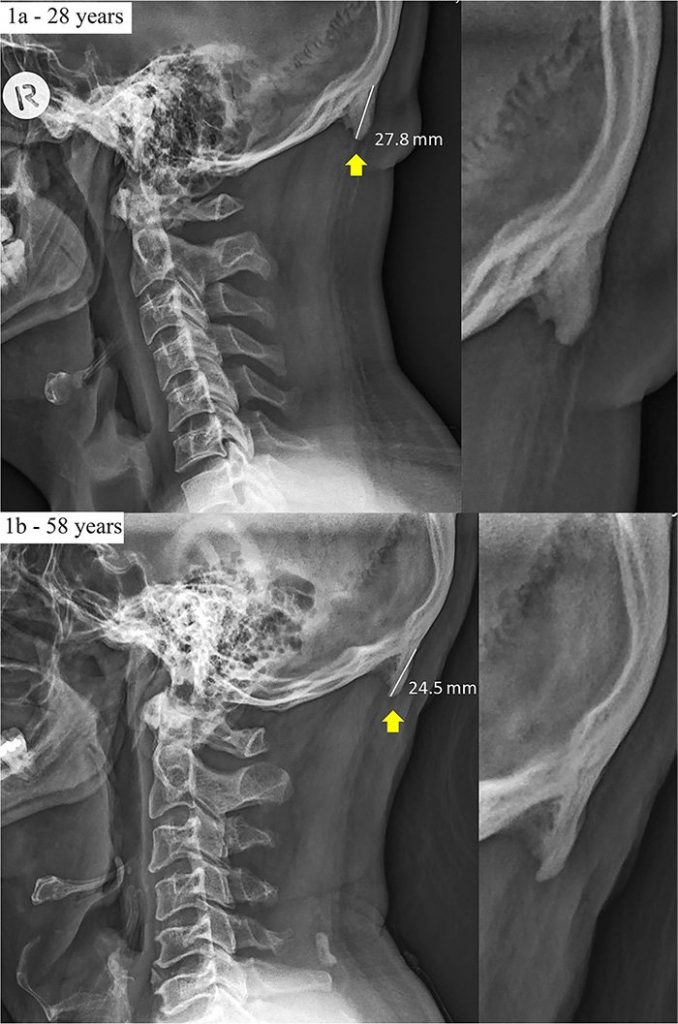 The significance of these studies

Bony projections, also known as enthesophytes, are more commonly found in the elderly and are assumed to be a normal part of the ageing process.. However, these recent studies have shown that such growths are occurring more commonly in younger people than previously thought. Importantly, this is also proof that musculoskeletal degenerative processes can start and progress silently from an early age.

From this, the researchers postulate that the advance of technology has altered the timeline for this type of bone growth. They link EEOP with excessive forward head posture and sustained neck flexion, which tends to be associated with the usage of mobile phones or other technological devices. They also suggest that EEOP is a sign of a serious posture deformity that can potentially lead to chronic headaches and neck and upper back pain.

Definitive conclusions could not be drawn about whether these skull ‘horns’ were caused by prolonged device use, as neither study actually assessed individuals’ phone use. This is simply an educated hypothesis made by the researchers based on the demographics of frequent gadget users.

In today’s world, technology is deeply ingrained into our daily lives and it is impossible to get through a day without our gadgets, but make no mistake, technology is also ruining our posture. The long hours spent toiling away in front of computer screens and other electronic devices put tremendous stress on our musculoskeletal system.

Constantly tilting one’s head forward or downward to look at screens, instead of holding it upright as it is meant to sit, may strain the neck and back of the head enough to result in bone growth in the surrounding tendons and ligaments. This is similar to the way the skin thickens into a callus as a response to pressure or abrasion.

Other terms such as “office syndrome”, “text neck,” and “texting thumb” have also been used to describe the impact of device usage on our musculoskeletal system.

You can read more about Office Syndrome here:

How Can We Prevent This?

The solution is not necessarily to swear off our gadgets and devices. Instead, an emphasis should be placed on developing good posture habits and positioning of our screens.

Sit up straight with your shoulders rolled back and your chin tucked to elongate your spine. Good posture is always important, even when not at work.

Adjust your sitting position regularly. Doing so every 1-2 hours helps to prevent muscle fatigue and subsequent slouching. You can also change the angle of your seat, and avoid sitting at the edge of your seat.

#3 Remember to take a break.

Take short breaks throughout the day to rest your eyes. This is also a good time to stretch, or take a walking break.