A recent news report by Channel News Asia titled “HIV-positive man who donated blood during pandemic faces charge of lying about sexual history” may have caused some concern in the community with regards to the issue transmissibility of HIV through oral sex.

Based on the report, people may wonder just how transmissible is HIV via oral sex and how does it compare to other forms of sexual practices like vaginal sex.

Based on the Department of STI Control Clinic in Singapore, the table below summarizes the risk of transmission of HIV based on the type of sexual practice.

Can HIV be transmitted via oral sex yes, but the risk is roughly 10x less likely than vaginal sex.

So when is there no risk of HIV transmission?

How can we reduce risk of HIV transmission?

There are no way to know your HIV states unless you go for a HIV Test.

There are multitude of misconceptions associated with HIV. These are some of the most common ones:
1) HIV is the same as AIDS. HIV (Human Immunodeficiency Virus) refers to the virus itself, whereas AIDS (Acquired Immunodeficiency Syndrome) refers to a spectrum of potentially life-threatening conditions that are caused by the virus.

2) HIV is a death sentence. This may have been the case several decades ago, where without prompt and adequate treatment, the infection progresses and causes the immune system to weaken, leading to AIDS. However, thanks to advances in modern medicine, most HIV infected patients today may never develop AIDS. This is why it is imperative to be on treatment, ideally as soon as possible after a diagnosis of HIV is made. It is also important to undergo regular HIV screening.

3) HIV can be spread by kissing, sharing of food or close contact. It is extremely unlikely to contract HIV via these methods as HIV is not spread by saliva. However, if the person you are in contact with has mouth sores/ulcers, bleeding gums or open wounds then there is a possible risk. HIV is spread by 3 main routes: sexual contact, significant exposure to infected body fluids/tissues such as semen, blood, vaginal secretions or breast milk, and lastly, mother-to-child transmission.

READ: How Long Can HIV Survived Outside The Body

Is a person infected by HIV any different from that of an uninfected person?

With or without treatment, a person infected with HIV may not appear any different from that of an uninfected person.
HIV infection undergoes 3 stages. The first stage (Acute Stage) may present with flu-like symptoms, fever and a rash. The second stage may present with lymph node swelling, but most patients do not have any symptoms at all. The second stage (Clinical Latency) can last anywhere from a few years to over 20 years. Thus, many HIV infected patients, especially during this stage, may not even know that they have contracted HIV. Lastly, the third stage is the presentation of AIDS symptoms.
HIV infected patients should receive prompt long term treatment and undergo regular follow up blood tests in order to reduce the viral load in their bodies to low levels. This allows their immune system to continue to function well and minimizes the risk of progression to AIDS. By doing so, they can essentially live very normal lives not any different from that of an uninfected person.

What are some of the treatments that a patient will receive upon diagnosis of HIV infection?

Upon diagnosis of HIV infection, a patient will have to start taking a combination of long-term daily medications. These are antiviral medications that work to prevent the virus from replicating. The patient will then be required to return regularly for blood tests to monitor the levels of HIV and the immune system. The goal of treatment is to keep the levels of HIV low, and thus allow the immune system to continue to function well.

How does AIDS affect a person’s health? What do AIDS patients die of?

Without adequate treatment, up to 50% of HIV infected patients develop AIDS within 10 years. Elevated levels of HIV affect the patient’s immune system and prevent it from functioning properly, eventually leading to AIDS. This may result in the individual being more prone to infections. Patients may develop symptoms such as prolonged fever, tiredness, swollen lymph nodes, weight loss and night sweats. HIV Related Opportunistic infections such as tuberculosis, recurrent pneumonia and esophageal candidiasis,  may occur as well. AIDS patients could also develop various viral-induced cancers.
The leading causes of death worldwide in patients with AIDS are, as mentioned, opportunistic infections and cancer.

Recently it was reported that in London, an HIV patient who underwent a bone marrow transplant subsequently had undetectable HIV levels. Does this mean that he is fully cured of HIV?

This is the 2nd ever reported case of an HIV patient being “cured” of HIV. In 2007, a patient in Berlin was also reported to have been cleared of the virus. Both of these cases have similarities: both HIV infected patients concurrently suffered from cancer (Berlin patient had Acute Myeloid Leukaemia; London patient had Hodgkin’s Lymphoma) and both patients received bone marrow transplant by donors who carried the rare CCR5 genetic mutation.
CCR5 is a protein on the surface of white blood cells that is involved in the immune system. It is one of the co-receptors that HIV uses to enter target immunological cells. This means that via CCR5, HIV is able to gain a mode of entry into a person’s immune system. People with CCR5 genetic mutation have resistance to HIV infection because the virus is unable to enter into their immune system like it usually does.
In the case of the London patient, subsequent blood tests have shown that the virus cannot be detected. However, this does not necessarily mean that he has been fully “cured” – the virus may simply be in a dormant, or “sleeping” state.
While the outcome was favourable in the two examples stated above, this form of treatment is not a viable large-scale strategy because bone marrow transplants carry significant risks and are extremely costly. However, it is undeniable that these two cases are landmark moments in the war against HIV as scientists continue to hunt for a cure. The hope is that by conducting more research on the editing of the CCR5 gene, we will one day be able to develop a safe, cost-effective and easy solution.

Do you think that mankind can eradicate HIV eventually? Before this happens, what kind of support can we give to HIV infected patients?

I believe that with continued advances in medical research, there is hope of a cure for HIV in the future. However, this is a long and slow process that may require many years or decades. Until then, the best option is to ensure that the public are able to gain access to undergo HIV screening even if the risk is not high, and that HIV infected patients are able to receive prompt and long term treatment.
From the initial shock and disbelief of receiving a diagnosis of HIV; having to accept the reality of the situation; to having to live with HIV daily, these are just a few examples of the tremendous challenges that HIV patients face in their lives, and for many patients these have a detrimental impact on their psychosocial well-being.
There is still a terrible stigma today surrounding HIV, and it remains very much a taboo subject that most people are afraid to speak about or face up to. Nevertheless, we can offer many forms of support for HIV patients. For starters, government and healthcare organisations need to continue in their best efforts to increase awareness and educate the public about HIV and its misconceptions. If you have a family member or loved one who lives with HIV, the best kind of support would be your understanding, care and acceptance.
Lastly, if you are a person living with HIV, do not despair. Seek the appropriate treatment that you require, and turn to your family and friends for moral support.
Take Care!
Tags: hiv screening singapore, hiv test

According to the Singapore Ministry of Health UPDATE ON THE HIV/AIDS SITUATION IN SINGAPORE 2014. 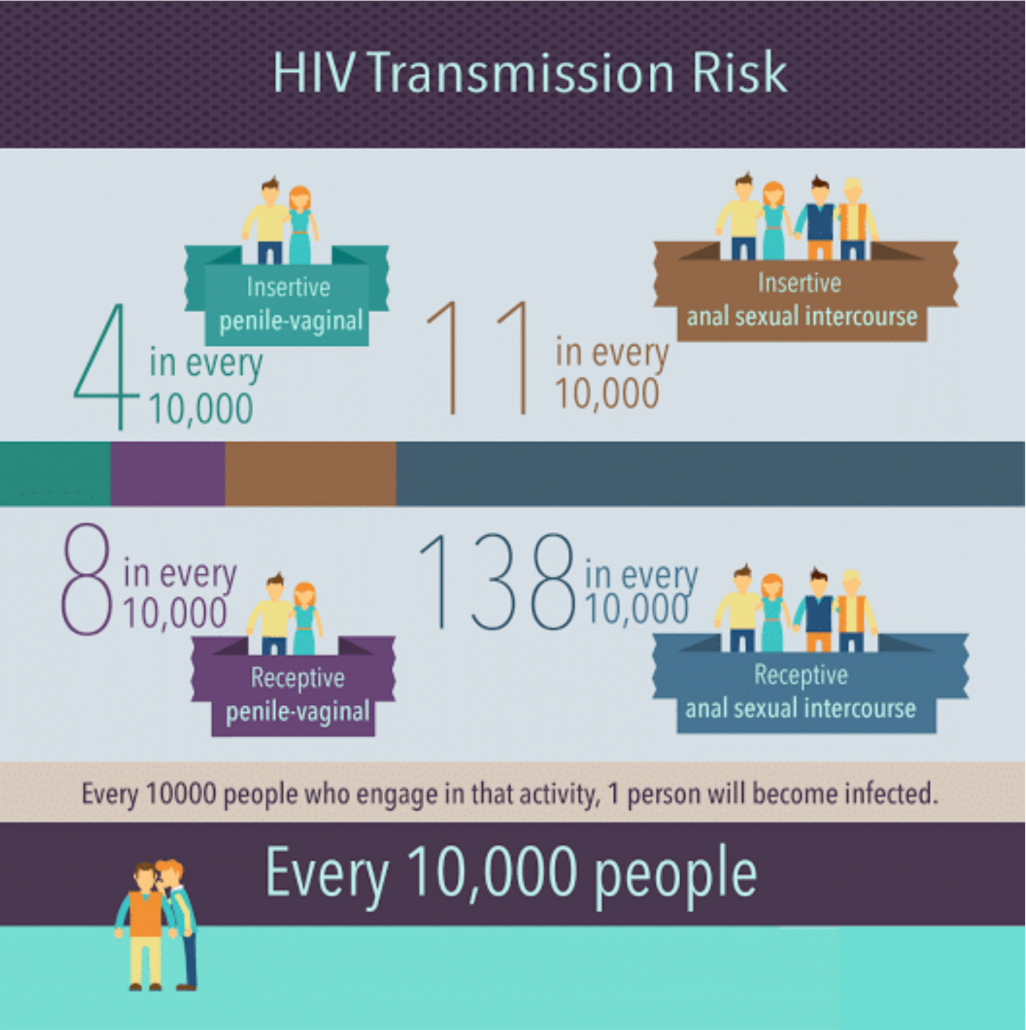 Estimated risk per exposure to HIV transmission: assume that the ‘source partner’ is always HIV-positive. For a partner of unknown status, the risk is affected by the prevalence of HIV in the relevant community – i.e., the chance that the partner does, in fact, have HIV. Unless otherwise stated, the sexual acts are always without a condom.

NO WAY of getting over the wall – not possible for transmission

We hope this short illustration answers and highlights questions people may have over possible ways of HIV transmission. Fluid-fluid contact is necessary for transmission and without this, there is NO risk for HIV transmission.
If you have any new questions, please feel free to ask them on https://www.dtapclinic.com/forum/
Take Care!